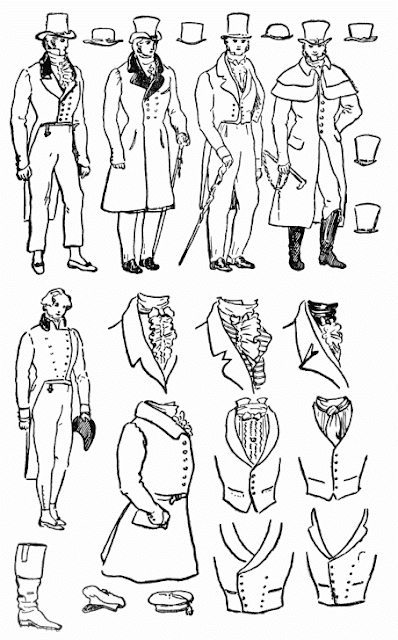 The mode in beaver hats was most varied; high straight crowns with small brims, others tapering at the top with larger curled brims, or crowns enlarging at the top with almost straight small brims. A short-crowned hat was also worn. The hair was combed towards the front at either side, and the face shaven, with the exception of short side-whiskers.

A very high stock of black satin or linen surrounded the throat, with or without the points of collar showing, and a frilled shirt, often stiffly goffered.

Coats were very tight-fitting and mostly double-breasted, with long swallow-tailed skirts, or long full skirts; the waist was rather short, and the effect of coat-front round-breasted with a high turned-over collar finished in large lapels, which were often treated with velvets. The favourite colours for overcoats were greys, buffs, greens, and blues, and the edges were neatly finished with fine cord. The sleeves, rather full in the shoulder, became tight on the lower arm, coming to a curved shape well over the hand, and buttoned up the side. The pockets were frequently set at an angle, as in illustration, and a short round cape, or two, was seen on many overcoats. A short type of coat is seen about 1827, with a single roll collar.

1820-1840 Regency Romance Fashions For The Fashionable Gentleman.
Waistcoats mostly had a round-shaped lapel, and were often double-breasted and very shaped at the waist, which was set fairly high; a long opening allowed the frilled shirt-front full display. There were also waistcoats having no lapels, no pockets, or no cover-flap; the points of front were very small, being buttoned to the end, or, with the double-breasted shape, they were straight across. 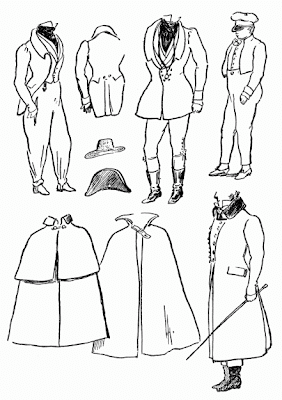 Breeches were not so much worn as trousers of cloth, nankeen, drill, and fine white corduroy; these were usually fastened under the boots with a strap, others were looser and often worn short, well above the ankle. A very full type in the upper part peg-tops, was in fashion about 1820-25 amongst the dandies, and for evening dress, very close-fitting breeches to the knee, or just above the ankle, the latter being opened and buttoned up to the calf. Pince-nez were favoured, with a heavy black ribbon, generally worn tucked in the lapels of the waistcoat; and a fob of gold seals, hung from the braces, below waistcoat pocket.

1830-1840 Fashions For A
Gentleman Of The Era.
Shoes and short Wellington boots were chiefly worn, the former being low in the heel and very short in the tongue, which was almost covered by small latchets, either buckled or tied, the shape of the toe being rather round. The Hessian boots with curved front and tassel at the top were still worn.

Enjoy,
Teresa
Posted by Teresa Thomas Bohannon at 9:56 AM

"I read it a little as a duty, but it tells me nothing that does not either vex or weary me. The quarrels of popes and kings, with wars or pestilences, in every page; the men all so good for nothing, and hardly any women at all—it is very tiresome: and yet I often think it odd that it should be so dull, for a great deal of it must be invention. The speeches that are put into the heroes' mouths, their thoughts and designs— the chief of all this must be invention, and invention is what delights me in other books."
Catherine Morland in Northanger Abbey by Jane Austen.

Thank you for visiting,
Teresa Thomas Bohannon
Author of A Very Merry Chase
And Shadows In A Timeless Myth
Available for Kindle, Nook & now...
also in Large Print Paperback.
PS: The links on this page that lead to pages (usually on Amazon) where purchases can be made, are affiliate links which help to support this blog.