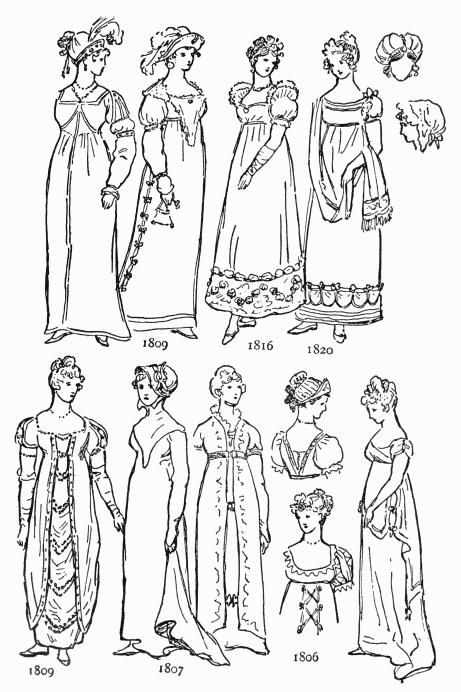 The hair at this period was worn in plaits or curls gathered on top, and during the latter years was arranged into stiff loops set with a high comb; a group of curls was drawn to the sides of the face, the hair being mostly parted from the centre. Plumes were much used for head-dresses, and caps with gathered puffs and pointed frills. A high-crowned straw poke bonnet, tilted upwards, was still in form; but the prevailing mode was a silk bonnet, with the brim curved in at the front, the sides being drawn together under the chin with a bow. The prevailing decoration was a group of feathers thrown forward or ribbon loops, and after this a large round hat, with a full gathered crown, arrived about 1827, or straw shapes.

Dresses gradually assumed a longer waist, and a short pointed bodice made its appearance here and there from about 1822, when short stays began to return, and pointed belt corselets were frequent, though the waistband or sash was chiefly used. Short puffed sleeves of charming character and workmanship were sometimes set in a gauze sleeve. 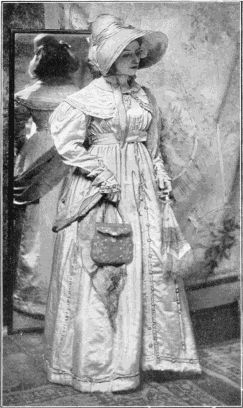 Spencers and pelisses had long sleeves coming from these short ones; they were rather full, and were caught at the wrist with a band. The upper sleeve gradually disappeared as the full-topped sleeves began to develop in size, about 1824; this fullness was often broken up into gathered parts, a tight cuff-piece usually finished at the wrist. The high set-up collars and neck-frills gave way to the flat capes about 1827, though the small ruffs were worn round the top of the high-necked capes to 1830. The gathered shoulder began about 1823, and soon became a marked feature; pointed or scalloped frills and trimmings came into favour from 1825, and about 1827 the sloped appearance in the bodice began to be noticed as the sleeves were set lower. The shoulders in ball dresses were shown, and a gathered Bertha of silk or lace was arranged round the neck of bodice. The V-shaped piece from the centre of waist or breast began to spread over the shoulders, where it was opened. This V shape was often open down to the waist, where it was filled in with a centre-piece of embroidery. Skirts were gradually set out fuller, with stiff-flounced petticoats; they had various simple or richly decorated borders and fronts, or several small flounces, or one deep one often with the edges cut into divers shapes. 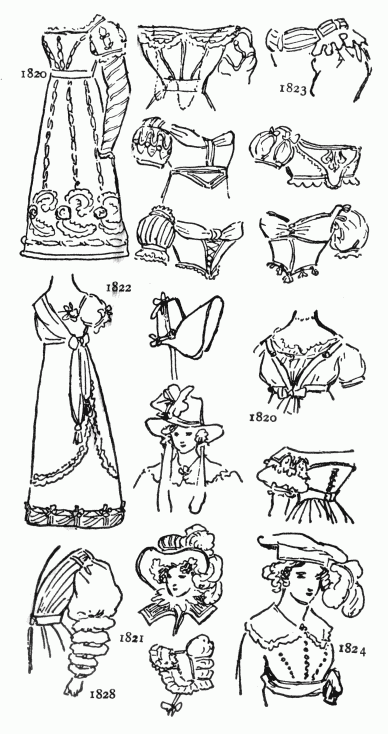 Shoes were rather round at the toes till near the end of the reign, when they took a square shape; a tiny rosette or bow was placed at the front of instep, and they were held by narrow ribbons, crossed and tied round the ankle. Boots lacing at the inside, with seam down the front, often had a toe-cap; no heels were worn.
Light gauze scarves were usually carried, and very small fans besides the larger feather ones. Bags or sachets of the forms illustrated were painted or embroidered in ribbonwork, chenille, tulle, and coloured silks.

A few specimens of parasols are also given, and gloves and mittens were of the same character as in the latter part of the last reign.

The patterns given of some of the dresses shown in the plates will be useful as to the measurements of the increase in skirt-width and sleeves; one may also note the very pointed set-out of the breast, sometimes made with two gores, which only occurs in this reign. Muffs were usually of a large size, and a bow with long ends was often worn on the front.

Enjoy,
Teresa
Posted by Teresa Thomas Bohannon at 9:50 AM

"I read it a little as a duty, but it tells me nothing that does not either vex or weary me. The quarrels of popes and kings, with wars or pestilences, in every page; the men all so good for nothing, and hardly any women at all—it is very tiresome: and yet I often think it odd that it should be so dull, for a great deal of it must be invention. The speeches that are put into the heroes' mouths, their thoughts and designs— the chief of all this must be invention, and invention is what delights me in other books."
Catherine Morland in Northanger Abbey by Jane Austen.

Thank you for visiting,
Teresa Thomas Bohannon
Author of A Very Merry Chase
And Shadows In A Timeless Myth
Available for Kindle, Nook & now...
also in Large Print Paperback.
PS: The links on this page that lead to pages (usually on Amazon) where purchases can be made, are affiliate links which help to support this blog.